That was a long day!

The TPEG 4 met as arranged to clear all from the fence in front of Jacquet and cut the branches. It was a massive task, however it was made lighter when 10 staff, yes 10, from the HSBC strode to the rescue. 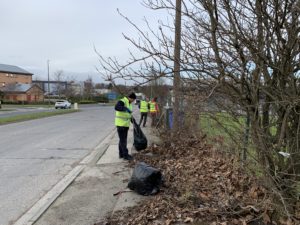 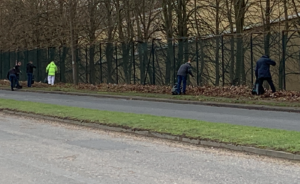 Oh what fun we all had – the trees were cut, rubbish removed and a lorry load of leaves removed before we had all had enough.

There are still some leaves to be removed, but the place just looks so much better now once again for a couple of days.

Thanks go out to HSBC and our friends at Twiggs who were instrumental in cutting the branches. Along with folks at Distinction Doors who disposed of half the rubbish. McDonalds were also instrumental in disposing of the remainder.

All the branches and leaves were disposed of onto the land owned by Jaquet too.

Although the main concentration was on the Jacquet side of the road, a great deal of litter was removed from the leaves on the opposite side. Leaves to remove in the future – but that’s for another day.